Invincible Episode 6: The Invincible animated series gained quite a lot of popularity in a very short amount of time. Its first episode was released on 26th March this year. Up until now, it has received 96% in Rotten Tomatoes and 8.8 out of 10 on IMDB. Also, it got positive reviews from critics all over the world.

Invincible Episode 6: Release Date and Where To Watch

Invincible Episode 5 was released on April 9, 2021, with the title “That Actually Hurt“.

The episode begins in the inner city outside a drug processing house. Two men taking a smoke break were approached by a super guy named Titan. He’s not the toughest super around but can definitely take bullets from firearms as he charges through two guards into the facility.

After taking a storm of bullets titans filings a forklift pinning down the boss of the criminals. He then proceeds to neutralize all thugs in the area. One of the goons pulls out a heavy cannon that looks intentionally designed to deal with those sporting super levels of endurance. One of the bullets ricocheting off of titan and tearing apart a nearby thug. Titan grabs a nearby pistol and hurls it into the gunman splitting his skull. The low-level criminals begin to flee realizing that the fight is lost. Titan holding up the local boss, titan promises to be less gentle the next time his turf is stepped on then snaps the man’s neck. The message was meant for one of the people still around to hear it, a teenager by the looks of it. Titan told him not to be stupid that he was cutting him a break. But then the kid shot with a sawed-off shotgun. Surprisingly titan didn’t kill him and just told him to run which the kid quickly obliged this time.

Kill Cannon and Invincible having another fight in the streets. Once again Kill Cannon proved to be no match for the new hero. At high school, amber was waiting in frustration for mark not aware of a secret hero business. Arriving just in time to be 20 minutes late marks tries to console Amber with Japanese cheesecake. Titan burns down a building apartment and is questioned about the justness of his actions by one of the former residents. Titan approaches and again shows some of his humanity by giving the newly homeless a handful of cash and the location of a place where they can all stay for few weeks. 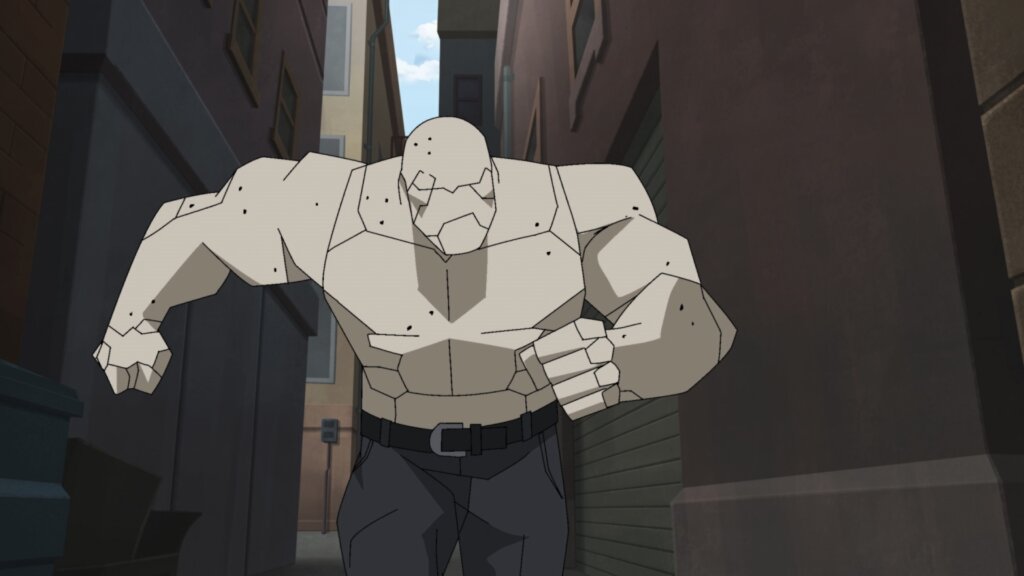 Invincible was fighting what appears to be a superwoman with the head of a Wookie knocking her out. His careless actions result in the apartment building collapse while both he and titan from the previous scene has very different intentions. The outcome was much the same. It’s been about 3 months since mark became invincible and that he’s been late to work on no less than 12 occasions since. In response to his boss’s ridicule, mark quits his job.

Next, we see Titan up on a building top threatening to drop a man off it because he owes money to titans’ boss seeing that the man has a kid titan spare his life and gives him two days to come up with the funds.

In the next titan montage, we see him retrieving a computer card. when the guard draws their gun before even turning around titan asks ‘is minimum wage really worth your life? or do you want to fire your guns in the air and walk away happy “ that’s exactly what they do like any sensible human being.

That scene showing us why Titan has done everything and that is for the machine head To whom he owes a debt. Now titan wants out as his debt is now paid and he wants his freedom back.  Machine Head says absolutely not as the titan is too useful to the machine head and he knows where the titan’s family lives. He uses this as an advantage to keep titan working for him. 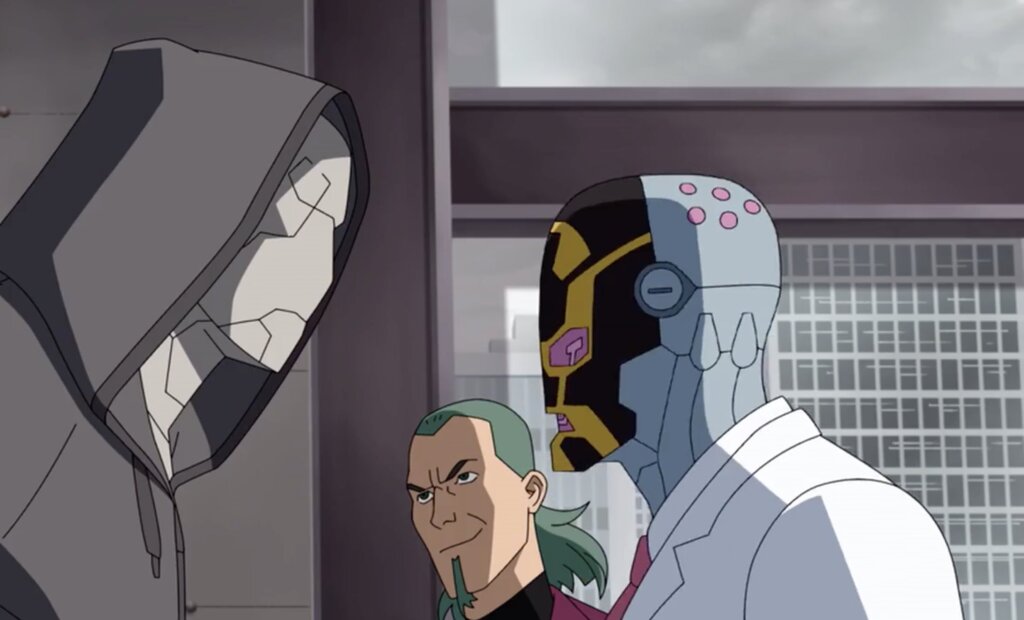 Then a cut to training scene between Omniman and Invincible. They’re trying to get the location of the mad scientist’s gravity bomb with little cooperation from the villain. Invincible doesn’t want to be mean and scare the villain into cooperating. So Ominman takes the reigns grabbing then dropping the now free-falling villain. He tells mark that he will catch the villain. Omniman also teaches him how to stop meteors and save the world. Amber’s pissed because she feels like she isn’t really important to him anymore. Because she doesn’t understand why he’s absent from their dates and time together. She does end up giving him one last chance to help him with a community meal at the homeless shelter later on.

This is the beginning where we see titan and the invincible line stories actually come together. we see titan come home, his wife is heartbroken. They’re not out from underneath the machine head. we see his young daughter point out to the sky where invincible is and asking if he’s the good guy of which she does the same to her father, he’s unable to answer. He decides to paint the top of the roof with the invincible’s name to get his attention. Titan asks for help with the machine head, he explains to him he’s not a criminal, he just owed money. He explains that machine head runs their city if it’s illegal. So invincible takes the time to see from the ground level what he doesn’t see while flying above like drugs being stashed in garbage containers. He also realizes the reason titans needed money wasn’t for himself. It was for his sick daughter.

In the meantime, we see other side stories like at the end of the last episode we saw something placed in Debbie’s closet. Finally, she finds it and it was Damien Darkblood’s notebook. He used the notebook to investigate her husband.

Mark asks his father and mother at dinner advice on the titan and on machine head of which Omiman tells him to leave it., he is above that type of help. And his mother says he is never above helping people.

We also see the new guardians of the glove kind of what an absolute mess they are. They’re celebrating a victory. Mauler Twins are back, as the other clone awakens from his pod. Only to have the robot sneak in and ask for help with tissue growth and DNA replication. And shows him a vial of blood.

Debbie is growing wearier and wearier of the Nolan and she gets them out of the house for 20 minutes, so she can search through things. She does finally come upon the old bloody costume that he has hidden, the one he killed the entire guardian of the globe with.

The big fights finally hit, Mark and titan break into Machine head often office of which he already knew that this would happen. The upgrade that titan stole, in the beginning, gave him the ability to predict basically any and all outcomes.  Meaning he was prepared and he hired five mercenaries to wait and to take out both invincible and titan. Isotope brings in the team of bad guys and they honestly beat the hell out of both titan and invincible. Ominman was watching from overhead not helping. He makes a totally anonymous call to the guardians and that when they’re nearly defeated the guardians take over to help only to have the same fate.

Unfortunately at the same time amber is waiting on Mark at the homeless shelter. Adam eve does decide to help her. Then she finally gets the call and has to go realizing the extent of what actually happened at the machine head’s office. She makes sure to tells amber before she leaves. 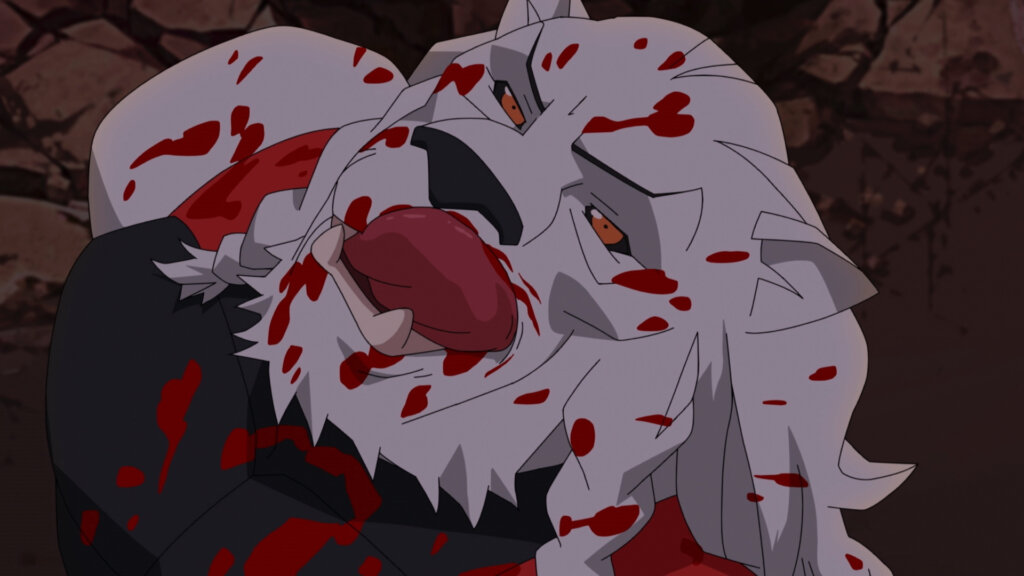 At the end of the fight, Battle Beast has not only killed or at least at the very least critically injured not only Black Samson but monster girls and Invincible. This causes the team to rage and kill most of the mercenaries and letting Battle Beast escape. So finally medics show up and through invincible’s point of view, we do get another glimpse at Omni man.  titan was gone and the machine head he’s depowered and taken into custody. But in the twist of the century, once the building is cleared, we see isotope arrive alongside titan with his wife and daughter saying that he actually told invincible to the truth. He is going to help people but some people come first unveiling that he lied and manipulated Invincible the entire time.

In the end credit scene, the testing being done on Mark Grayson’s blood.