Fruits Basket Season 3 Episode 6: It is one of the best ongoing anime. It’s a reboot of the first anime series that aired in 2001. The reboot is done by TMS Entertainment and Funimation and first appeared in 2019. And since then it gained lots of popularity. Its intricate plot gathered quite a lot of fans. Fruits Basket Season 3 or the final season started this year and up until now, we got 5 episodes.

Fruits Basket Season 3 Episode 6 will be released on 11 May 2021, at 1:35 AM JST. The online platforms where you can watch Episode 6 are  Crunchyroll,  AnimeLab, and  Funimation.

The episode starts with Ayame Sohma asking Mine Kuramae will she leave him if his curse does not breaks. But according to Mine, staying with him makes her happy. So she will never leave him.

Here in Shiraki Books Store Mayuko Shiraki is thinking about taking a trip somewhere. At that time Hatori Sohma was there. She asks Hatori if he has any specific place in his mind, he wants to visit. Hatori thought for some time and says no.

In the student council room, Yuki and Machi is alone. Machi gave some papers to Yuki. When Machi is leaving Yuki holds her hand and he wants to say something to her. But at that time other members enter the room and Machi goes to a corner of the room. Yuki then talks to himself that she deserves to know that he is not a normal human.

Akito locked herself in the room so Kureno asks her to come out. He says the world will not shape as she wishes. And with time persons change and she will gonna left behind.

As Momoji grew up everyone in the school is complimenting him as well as Tohru. When they were walking they saw Hatsuharu and Yuki so they went to them. They talk about Isuzu. Then Momiji tells them to have ice cream and they agreed. 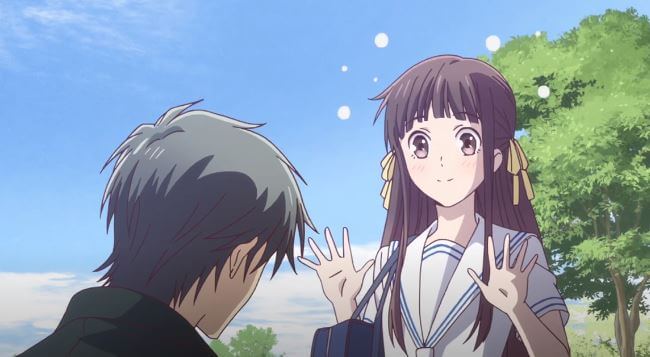 In Shigura’s house when Shigure was leaving to the estate Hiro and Kisa came. And after some time Kyo came and Hiro starts to irritate him. And as Kisa never talked with Kyo out of fear, trying to greet him. Kisa thinks now Kyo is a good person because Kyo behaves well with Tohru.

In the estate Kureno arguing with Shigure about Akito. Kureno asks Shigure to be more kind to Akito. But Shigure tells that he is not a nice person so he could not pretend one. And he does not want to be Akito’s father or something like that.

Yuki, Hatsuharu, Tohru, and Momiji arrived Shigure’s house and they are thinking about what to make for dinner. Momiji asks for a barbecue. But Yuki says that they should go with curry. They started to make curry in the garden. Then Shigure comes and he is very happy to see all of them.

When Akito was sleeping she dreamed about her past when she was told that she is the god. And no one will leave him. At that moment she felt the bond between her and Momiji breaks. She wakes up and rushes to Momiji. Akito cries in front of him and Momiji sees her with pitiful eyes. He tells to her that he will not gonna tell anyone about this and she wants her to go home.

On the next morning in school, all of them are worrying about Momiji. Everyone thinks he is a little off. When Kyo went to the roof of the school he saw Momiji standing alone. Momiji gave some hints about the fact that his curse has broken. But he is unhappy because he has feelings for Tohru but he knows Tohru will be happier if Kyo’s curse breaks.

Momiji went to Akito and tells her that he cannot be on her side his whole life because his curse broke and he has a choice to be free. But also Momiji is unhappy because his friendships will not gonna be the same. But he also said that his family is not his anymore but he will find his happiness down the way. He is free and ready to take his first step and saying this he leaves Akito’s room.

Also read: The mayor says New York City will be completely open and operating at 100% by July 1