Boruto Episode 197: Boruto: Naruto Next Generations Episode 196 adapts Boruto manga chapter 29. The previous episode was really fantastic and the animation was completely speechless. In episode 196, the creators adapt the story from the manga series but they also added some different scenes. Fans are really excited about the upcoming Boruto episode 197.

Boruto: Naruto Next Generations Episode 197 is set to release on May 2, 2021 (Sunday) at 5:30 PM. As all-new episodes will release on every Sunday.

Where to watch? You can watch All the latest episodes of Boruto: Naruto Next Generations on Funimation, AnimeLab, and Crunchyroll. Boruto Episode 197 will all released with English subtitles on Hulu.

The episode starts with Koji talking to delta about the special unit that monitored all the persons who entered or left the Leaf village. A Sensory Unit was led by the Yamanaka Clan. Delta says that was at the time of war. And asked if they are still active. Because we have peace now. Koji warned Delta about Kara as Kara working on enhancing the Sensory Unit. They can distinguish whether a chakra previously registered in the Leaf village or not. If anything unknown enters the village it will detect instantly. Delta replies then it will not be easy to infiltrate the village. So for this reason Koji wants to go alone and not take Delta with him. Koji says if Delta should not involve in this and jumps of the wall. And it seems Koji is determined to find Kawaki. Delta is pretty angry about the decision Koji made.

In Naruto’s house, we can see the vase, which was brought by Kawaki is filled with flowers, and Kawaki watching it in the morning. And the sticky glue, which Boruto gave Kawaki is on the table in front of Kawaki. Kawaki wandering what Boruto wants him to do. Boruto is sitting near on a sofa and playing video games, making so weird sound, which making Kawaki angry.

At that time Sarada and Mitsuki ring the calling bell. Hinata opens the door. Both of them greet Hinata and Sarada says that they don’t have any mission that day. So they stop by. Himawari calls Boruto and says that he have visitors. Boruto is very surprised to see them because they rarely come together. Mitsuki says that they came to spy on Kawaki. Listening that Sarada freaks out. Mitsuki says that Sarada said that to Mitsuki and invited him. Listening to all that Kawaki replies that at least Mitsuki is honest.

This is the first time when Mitsuki and Kawaki are facing each other. Mitsuki explains that he and Boruto are on the same team and also he is his friend. Then Mitsuki asks for a handshake. But showing a bad attitude Kawaki says that he is not going to put his dominant hand on Mitsuki’s hand. He also added that he doesn’t handshake to people he doesn’t know much about. Mitsuki is very impressed by this fact.

Sarada asks Boruto about how Kawaki is behaving. And is Naruto keeping eye on Kawaki. Boruto teased Sarada saying that is she worried about Kawaki. Sarada is mainly worried about him because of the day before when Kawaki reacted in the streets when the boy bumped on him and also when he broke the flower vase at the store. Sarada is looking at Kawaki and the Sticky glue in front of him. And it is annoying Kawaki. So he says that he is not interested in being friends with them. Sarada says Kawaki that he is very rude.

Naruto opens the door and says with delight that they have got a lot of visitors. Sarada bows and Mitsuki asks to excuse them. Boruto was playing video games so Naruto wants him to leave that as his friends are there. Naruto says all of them that he will be their training partner for Shinobi Hand to Hand combat. Boruto says that he thought Naruto have forgotten again. His video is going well, but Naruto brought is up so he is going to go. Himawari teases that Boruto is very happy about that. And all of them smiles at Boruto. Mitsuki asks if he can come. Assuring him Naruto asks Kawaki to come with them. Kawaki doesn’t want to go but when Naruto tells that they might learn something about Karma, he agrees to go.

Now they are in the forest ground Naruto and Boruto facing each other and Kawaki, Himawari, Mitsuki, Sarada are sitting outside the ground watching them. Boruto warns Naruto that he is not going to hold back only because Naruto is Boruto’s dad. Naruto allows him to show all of his power. 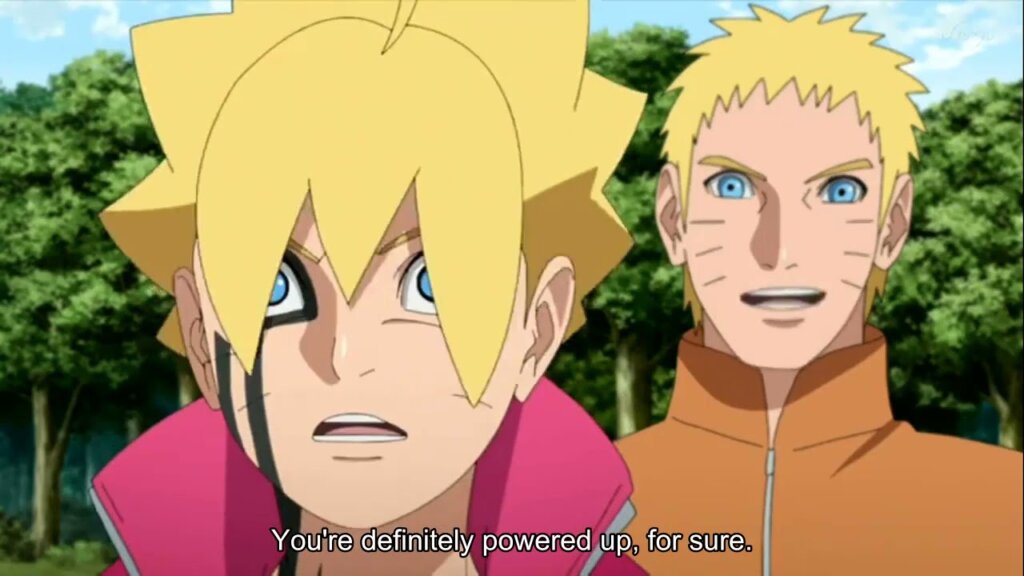 Boruto flies and tried Shadow Clone Jutsu. And he successfully does that. Kawaki is pretty amazing. Himawari tells that Boruto has mastered it too. Boruto makes 3 shadow clones and tries to hit Naruto but he fails. Naruto beats all of them pretty easily. Naruto teases him by telling him that Boruto said he will not gonna hold back. Kawaki tells Boruto to leave these petty tricks and use Karma. Because they want to get rid of Karma so they need to learn as much about it.

Kawaki actives his karma and as a resonance effect, Boruto’s karma also activates. And Misuki and Sarada are pretty worried about that. Even Boruto is worried. Sarada tells Naruto to stop. But according to Naruto Kawaki got a point and they should continue. And they start fighting, but now Boruto is much faster than before. Boruto used lighting arrows and Naruto avoids it with Shadow Clone Jutsu. In the end, Naruto beat Boruto and Boruto’s karma deactivates.

In the evening when Sarada and Misuki is returning, in the streets Mitsuki tells that Boruto was strong. Sarada says he is good, even Naruto praised him. But Mitsuki is worried about karma. Then Sarada tells that she will be going to practice with her dad and she will try to become stronger.

In Naruto’s house, Kawaki is sitting and remembering his harsh training with Jigan. Jigan’s words are still ringing in his ears. Getting over it he goes to the study room of Naruto. Naruto advises Kawaki to study hard if he doesn’t want to end up like him. Kawaki wants to join them in the training. Sensing that Naruto asks him to join next time on Ninjutsu training. According to Kawaki he can’t even if he wants to because of chakra. Then Naruto tells about chakra him.

At Sasuke’s house while eating Sarada asks her dad Sasuke for Chidori training. She does not want to fall behind. Sasuke warns her that training will be harder than last time. But She is very enthusiastic and wants to learn anyway.

In the last scene, Kawaki is trying to fix the broken vases with the glue that Boruto gave. At that moment Koji found him with his frog.