The Republicans in the United States have started the conservative CPAC 2021 forum in Orlando, Florida, this Friday, with praise for former President Donald Trump‘s policies (2017-2021), who will close the convention this Sunday, which will be his first public address after finishing his term last 20 January.

Matt Schlapp, president of the Conservative Political Action Conference (CPAC), anticipated that the message to the “Republican establishment” at the summit is that “they don’t have to like Trump but his policies.”

“They must love the millions who brought this coalition. Let’s make it grow, rather than shrink it,” stressed the president of the CPAC, a forum that started yesterday with some minor activities.

Schlapp thus invited the Republicans to take advantage of the sessions that begin today to “plot, plan, and unite to defeat socialism in the United States.”

“America is under threat,” said Scott Walker, former governor of Wisconsin, one of today’s first speakers.

Walker emphasized “freedom of speech”, which is another pillar of the meeting after Trump’s social media veto over the Capitol in Washington, brought on by his supporters on January 6, 2012, incited by the former president.

Trump is going against Biden’s Policies

This meeting is also expected to be Trump’s platform to go against President Joe Biden’s policies, which defeated him last November and has reversed many of his policies, including migration, since his inauguration on January 20.

Similarly, to unite Trump’s allies and detractors and solidly reach the party’s legislative and primary elections ahead of the 2024 presidential elections, in which the former president will presumably compete if none of the legal processes opened against him thrives.

CPAC is going to lead from the beginning by Ron DeSantis

The opening of the CPAC 2021 was now led by Governor Ron DeSantis, his political ally and who opened the state’s doors to the event usually held in the Washington area, but because of the pandemic, he moved to Orlando.

“Welcome to our oasis of freedom,” said DeSantis, who has been criticized in the “state of the sun” for the handling of the pandemic by opening up businesses quickly and not making it mandatory to wear face masks against covid-19. 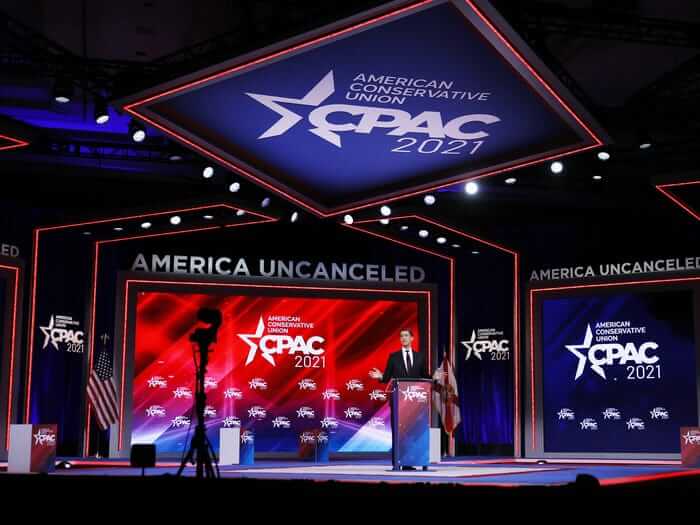 “Florida did well, closed states did it wrong,” DeSantis claimed, that the media points to a potential candidate for the Republican presidential nomination.

On the first day of the forum, Senators Ted Cruz and Rick Scott, as well as former President Donald Trump’s son, Jr., also have their agenda on Friday.

CPAC 2021 – REPUBLICANS ARE AGAINST ELECTORAL FRAUD

The event also paid tribute to the controversial broadcaster Rush Limbaugh, who died on February 17 in Palm Beach, Florida, and will now have a place in the Conservative Hall of Fame.

“Rush showed that fighting the left requires strength, and conservatism without a vertebrate spine is doomed to failure,” DeSantis said.

The meeting will also address the issue of China, mob and street violence, and the “protection” of the elections, which Trump, who has yet to acknowledge defeat, claimed were fraudulent in November 2020, without presenting evidence.

Since he left office, Trump has been based in Palm Beach, Florida, in his private Mar-a-Lago club, and has so far maintained a low profile.

The former president was acquitted earlier this month at the open political trial in Congress as a suspected instigator of violence unleashed by his supporters in Congress on January 6, in which five people were killed.

In addition to Cruz, one of the few speakers of Hispanic origin, Cuban-American Senator Marco Rubio, another of the possible Republican pre-candidates for the 2024 presidential elections, will also speak.