Louis Tomlinson recently confirmed that he’s got a massive new project in the works and some of his fans believe they’ve already figured out the title and release date of his upcoming documentary. The name Louis Tomlinson was trending worldwide on Twitter. Recently after the pop star replied to a few tweets with some of his fans sharing some very exciting news.

Last week an optimistic Directioner got straight to the point and asked Louis if he’s thought about making a documentary, which to everyone’s surprise the Louis replied “Already on it love”. That’s right Louis confirmed that he’s currently working on his very own documentary. Since he didn’t reveal anything else about this project his fans began scavenging for clues. It turns out that just a few days prior to making his revelation, Louis has tweeted out the phrase “Faith in the Future” which has several of his fans believing that this will be the title of his upcoming documentary

Advertisement
. Other Louis fans let their imagination fly high and took it one step further speculating that the former 1-Directional member will release it on his birthday that is 24th December. 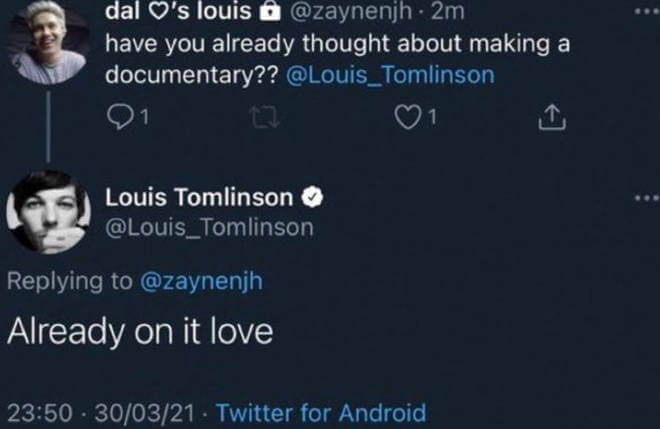 It would make a perfect Christmas present for his fandom. Louis Tomlinson’s fans also release some fan-made trailers. It’s also worth noting that this past March 26, Louis took some time out of his busy schedule to celebrate the 11th anniversary of his X-factor audition.

He tweeted “11 years since my first audition! I had no idea on that day just how much would have changed between then and now. Thank you to everyone who’s been there for me along the way! We’re only just getting started! ”

11 years since my first audition! I had no idea on that day just how much would have changed between then and now. Thank you to everyone who's been there for me along the way! We're only just getting started!

Who could’ve predicted that on that fateful day we were all witnessing the birth of a new music star.  We haven’t seen much of Louis since his virtual concert last December, for which he sold 160,000 tickets becoming the biggest male solo artist live stream of the year. Louis Tomlinson definitely not showing any sign of slowing down.

Last month Louis announced that he’s making one of his long-time dreams come true tweeting ” I always dreamed of having my own label, having an imprint never really worked for me because I still had to have someone else’s blessing to sign people. People I believed in massively but unfortunately didn’t fit the traditional pop role hence never doing the deals….”

We cant wait to see Louis take on his new role managing new talent and of course we’re more than ecstatic about his upcoming documentary.