Season 5 Episode 14: The Seven Deadly Sins are also known as Nanatsu no taizai is one of the most loved anime series among anime fans. It starts on October 5, 2014, when the first episode aired and since then it gathered quite a lot of audience. Up until now 4 seasons already released and 5th season is running. Now it has 8.1 out of 10 in IMDB and that says a lot about the quality of content this offers. So if you want to watch this it’s on Netflix.

This anime is the adaption of the manga The Seven Deadly Sins(Nanatsu no taizai) written and illustrated by Nakaba Suzuki who is one of the best Shōnen Manga writers if not the best. This manga sold all over the world about 40 million copies.

The main storyline is like this, The Seven Deadly Sins are a group of knights in the region of Britannia. They have disbanded 10 years ago when we were framed to overthrow the Liones Kingdom. The rebellions who were behind this evil act are called Holy Knights. After that, The Holy Knights captured the king. But rumors continued to persist that The Seven Deadly Sins were still alive. So after 10 years the third princess, Elizabeth, sets out on a journey to find the Seven Deadly Sins and ask for their help to take back the kingdom. After that, she found Meliodas, the leader of The Deadly Sins. And they going to search for other comrades and fight the Holy Knights, who were manipulated by a demon named Fraudrin. Fraudrin did this to free all the Demons from their prison.

The Seven Deadly Sins Season 5 Episode 14: Release Date and Where to watch

where to watch episode 14? you can watch The Seven Deadly Sins Season 5 Episode 14 on Netflix. 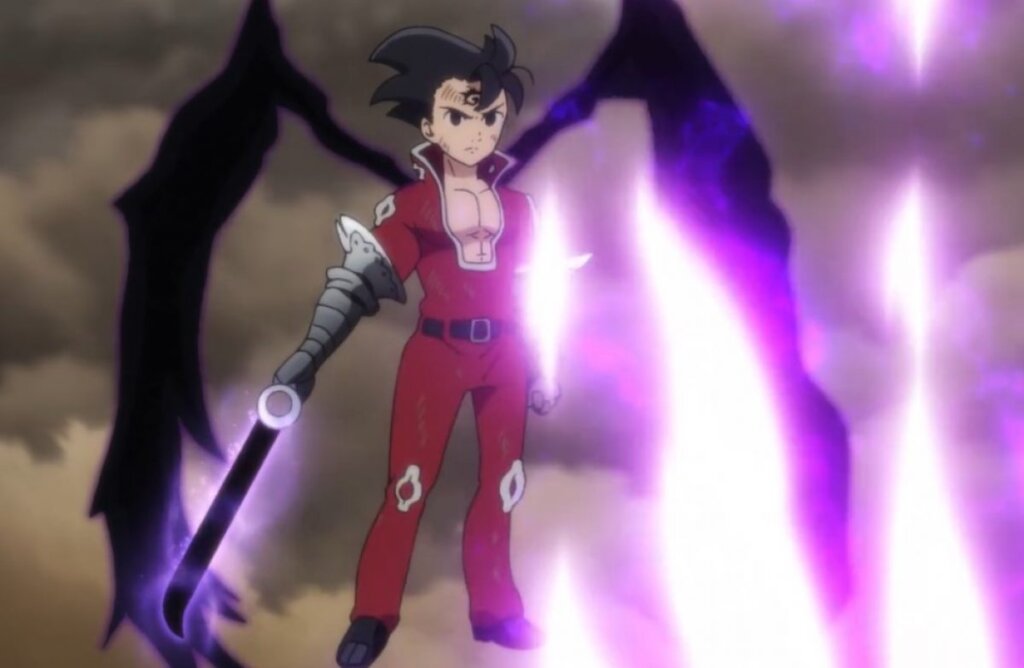 At the start of the episode, we can see that Ludociel is leaving the living world. And he could not see anything with his eyes. So Mael is telling him that The Demon King was defeated and the war ended. All of the credit goes to The Seven Deadly Sins. If they were not there they could have lost the war. Then Ludociel replied that The Seven Deadly Sins have defeated the Demon King that doesn’t mean that Holy War is over. This is the first step of ending the Goddesses and Demons war that is going for so long. Agreeing with him princess Elizabeth also added that she never thought that she would hear this kind of word from him. And after this, she thanked him for his contribution. Listening to this Ludociel laughed and left the living world.

The seven Deadly Sins were still sad, so Escanor asked that why they are sad because Ban and Meliodas already came back. In reply to that King and Diane said Elizabeth is going to die tomorrow and until then they had no idea how to break the curse. Diane was crying and said that in this way Elizabeth will gonna die. Elizabeth replied that she just wanted that Meliodas return to his normal form. She also added that even if she dies she will gonna reincarnate again and again and come back to them. But if Meliodas would have become the Demon King once then there was no way they could see each other again, so it’s fine. Interrupting her Meliodas said that there is a way to lift the curse on him and Elizabeth. Gowther told Meliodas not to joke in that kind of serious situation. Ban also was going to say that, but he remembered that in the Pergatry Demon King said that he only can be defeated if Meliodas use his original magic. 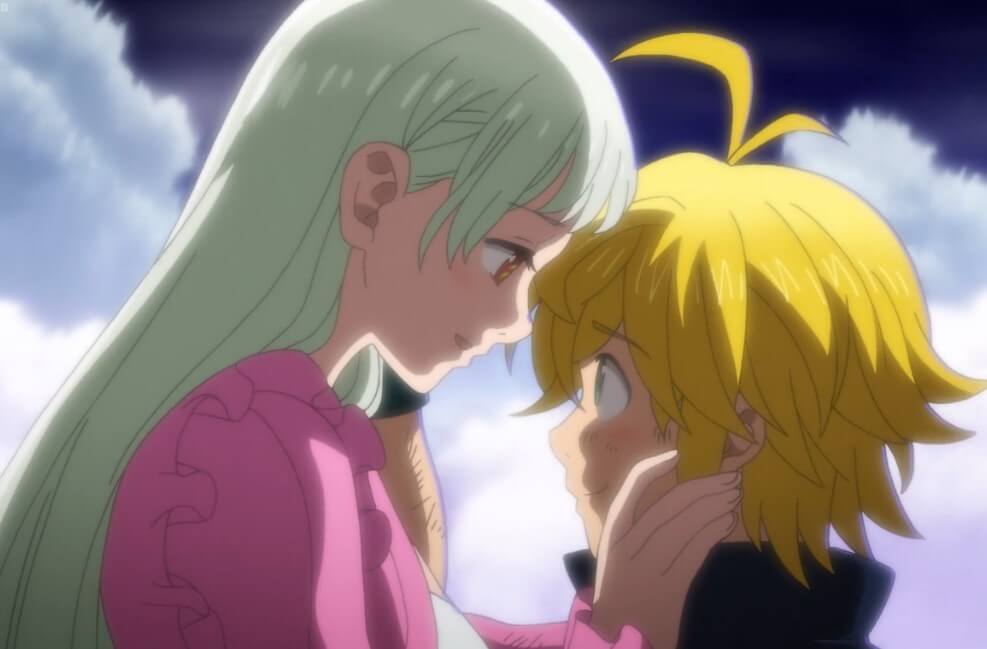 Listening to this all the members of The Seven Deadly Sins asked Meliodas that what he will gonna do now. After that Meliodas asked Merlin for help. Marlin used a spell named Curse Discovery. By this spell, curses get their physical form. And they can see the curses now which are everlasting life and eternal reincarnation. Meliodas comes in his magical form. Seeing this all of the members were shocked. Now with his magical power, Meliodas obliterates the curses forever. Seeing this Marlin was shocked and thought how he had destroyed the curses made by Gods so easily. After that Elizabeth hugged Meliodas. He said that their long journey has ended now. Elizabeth said let’s head back to the kingdom.

On the way, they met their allies and Ban met Elaine. Elizabeth told all the other allies that the war ended and all of them are returning to Liones with The Seven Deadly Sins. But Meliodas said that he has some job to do before going to Liones. So They went to the place where Meliodas had some work and they found a trench. Meliodas and Elizabeth went into the trench. King asked that what was in that trench. In reply to that Merlin told that twelve years ago Meliodas sealed here Zeldris’s lover Gelda, who is a vampire.

Reaching the bottom of the trench Meliodas broke Gelda’s seal. Gelda wanted to see Zeldris in front of her but she saw Meliodas. So she asked him where is Zeldris? Meliodas replied that Zeldris is missing after the battle against Demon King. When Gelda was leaving the place Meliodas said that Zaldris maybe not in this world. Gelda replied that wherever he is she will gonna find him.

Gilthunder wakes up and asked Howzer that where he was. He replied that they found Gilthunder with Margaret in his arms. So they took him there. Gilthunder asked where Margaret was. As soon as he asked Margaret came before him and she was perfectly fine. And then Gilthunder and Margaret did some romantic staff. 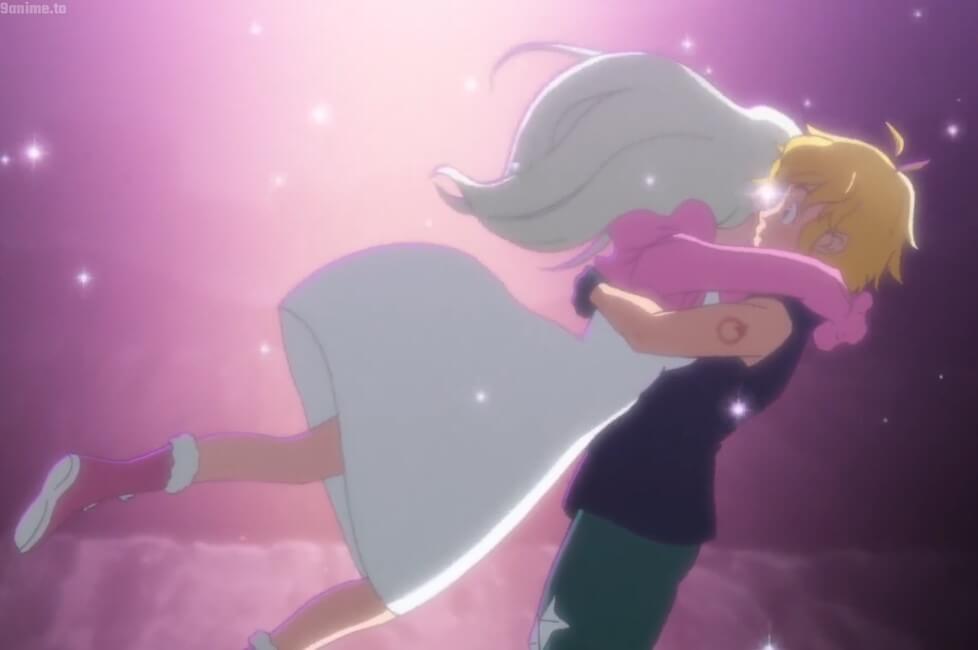 Meliodas and Ban found Hawk, who was eating some bad staff. They both asked him to come back with them. But Hawk denied and added that he is useless. His contribution to the war was nothing. Even Meliodas and Elizabeth had to rescue him once. And he also added that he has no right to stay with them. Listening to this Ban said that he respects him as much as before. And Meliodas said that he may be weak but he is not a coward and that is his best power. After hearing those Hawk agreed to go with them and they went back to Boar Hat, where everyone was happy and drunk. Meliodas and Ban went to the roof.

At last, Ban asked him that how much time he will gonna be there and Meliodas replied that he knew that Ban would know this eventually.

Also read: Knights And Magic Season 2 Coming Soon!!! All you need to know