Back Arrow Episode 14: Release Date and Where to Watch

Back Arrow Episode 13 titles ‘Do the heavens cry when the princess rises?‘ released on April 3, 2021. Episode 13 was directed by Won Chang hee and written by Kazuki Nakashima.

As the war between Rekka and Luthoh rages on, episode 13 brings a lot of action and reveals it to the audience.

There is also a new opening and ending. The interesting reveals about the opening of Rudolph’s new form as he fights Zetsuo in it.

As Arrow struggles against Kai, Elsha and Atlee are unable to help him as they are struggling themselves with the generals from Rekka.

Then the battle expands as reinforcements come to aid Elsha, and Atlee, while Prax joins Arrow against Kai and Ren. They bait Kai to the top and Lure him into the flying guardians in the sky. They surprise Kai as he gets blasted by them. Prax beings talking about victory and finishing them off. But Arrow unsurprisingly does not want to kill them. Regardless, Ren and Kai manage to overpower and survive the attacks from the flying guardians. They rush at Arrow and Prax as they flee back to the land. Shu tells Arrow to use his sword ability, and Arrow allows Prax to wield him. Elsewhere, Zetsuo looks on in delight.

AS the Princess and her aids look on at the fight, she is told someone has projected the fight above the people. So that they may also see the war unfold. The Princess wonders who would do such a thing, and then Rudolph comes into the conversation and say he did. He tells her it’s unfair for only nobles to be able to watch. The Princess tells him the war isn’t a form of entertainment, but Rudolph tells her war is the greatest entertainment there is, as he drinks.

Unfortunately, the Princess can’t do anything as Rudolph is bove her. Her nobles tell her it’s fine and that they just have to win. They have a plan to bait a major part of Rekka’s army into the mountains, and then set off bombs to bury them alive. The Princess puts hope in Arrow and Prax. Suddenly, her blind warper with her evil persona happens to roll by and hit her. It’s not shown how this happened. 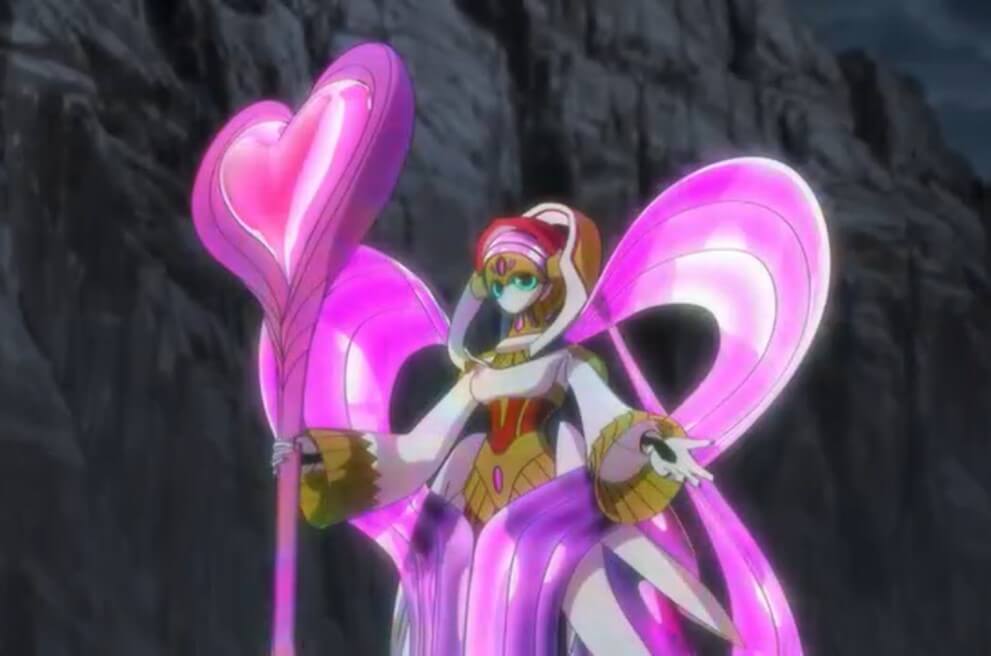 As the fightback on the battlefield continues, Kai and Ren had to separate to avoid Prax from slashing them with Arrow’s sword form. Kai manages to grapple Prax with his whip as he is directed by Ren, shocks her, and repeatedly starts slamming her on the floor.

The Princess nobles then get into contact with Admiral Bit, but the situation is getting more and more critical. He is unable to carry out the plan effectively as they struggle against Rekka. Shu is quietly pressing commands in the background. The Princess, seeing how serious the war is getting. Decides to take her bind warper and head into the fight. She assures her nobles that she can control her evil persona.

Arrow then grabs Kai’s Briheight and flies him to the top near the flying guardians to try and reason with him about the fighting. He tries to get him to relate to Shu. But Kai says he can’t because Shu is a traitor. Arrow tells him that there is more to Shu and that he wants to know all about the world and solve the mystery of what is beyond the wall. If he has to betray his friends to get that done. He says he will do it. Arrow fails to try to get Kai to stop fighting the war and gets blasted from behind by Ren. Kai reverts back to his human form. And slides out of Arrow’s Briheight’s grasp. He then summons his Briheight again and merges with Ren to regain his flying abilities.

Now, Prax and Arrow are losing and near their defeat. Kai grabs Arrow, raises him, and tells him that his beyond-the-wall idea is nonsense. Kai states to Arrow that Arrow knows nothing of the people who live inside the wall. Whom kai calls the starving, suffering, poor people who live only to die. He goes on to say that there’s no hope, dreams, or meaning in their lives and that Arrow cares more about the wall’s secrets than the starving. With these things considered, he says this dream of the wall is not worth having preposterous, and self-centered. As he continues to beat Arrow, he tells him he is no more than a fool who turned his back on the world.

Arrow disagrees but gets burnt by the next blast, knocking him onto the floor. Even though Kai is crushing Arrow, his words seem to be crushing him even more. Admiral Bit looks on and feels unable to be able to do anything to help. Despite reaching out to Shu. Shu just ignores him as he continues to work on whatever he is plotting as he continues to press buttons on the screen.

Before Kai can deliver the last strike to Arrow, the Princess appears in her Brigheight, which has tank-like, support abilities. Rudolph is shown eating and looking on in excitement.

Her conviction is, “Love is Everything“!

Her Briheight is able to absorb attacks and heal her comrades. Now with Arrow, Prax and the rest healed the fight restarts.

The battle turns in favor of Lutoh now, with the people of Lutoh cheering as they look on faithfully. Bit has lured Rekka into the mountains, and the Princess nobles see the condition for victory are about to be met. 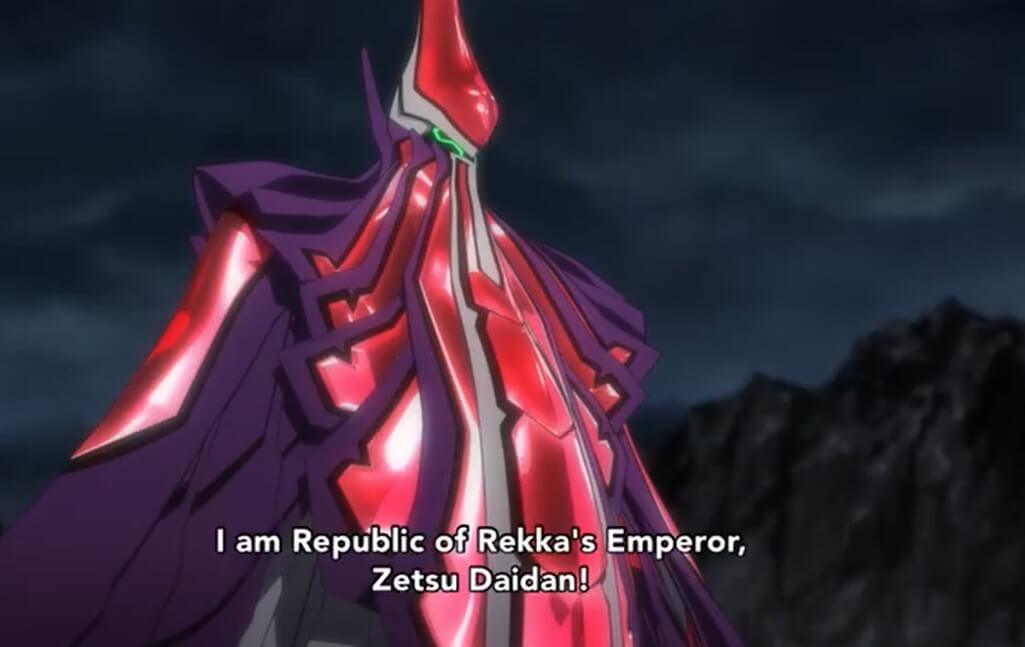 Suddenly, the war turns around completely once again, this time in favor of Rekka. Zetsuo gets up and prepares to head into the battle, as the thought of fighting the Princess is something he has dreamed of. He prepares to manifest his armor and has 10 bind warpers launched toward him. 5 on one arm, and 5 on the other. This war very surprising and took me aback when I saw that. The concept of putting on 2 had been theorized by the viewers, but this elevates that significantly as a fact.

Zetsuo launches himself like a missile to the battlefield almost instantly, and even Shu is shocked to see him read and preparing for battle.

Zetsuo says that if the Princess is going to get into the fight, he will also. He tells his men to make way, and after the part, he approaches the Princess. He says that there is too little space to fight. And after raising his arms, he destroys all the mountains around them with his conviction particles. Lutoh’s grand plan has now failed as this wiped out the bombs that were supposed to bury Rekka’s forces.

Zetsuo then states that his conviction is “I don’t follow the path. I make the path”!.

He prepares with excitement to fight Princess Fine (Feen-eh) but is rushed by Prax and Arrow. Sadly, they both crushed by his telekinetic powers and are brushed aside like trash.

Zetsuo is overwhelmed with excitement and tells Fine it’s been ages since he had someone exciting to fight. But he doesn’t want to fight Fine specifically. He claps and the force behind it blows away Fine’s allies that were behind her.

He then begins pushing Fine into releasing her evil persona, and after hitting her with a huge energy blast. He succeeds in bringing her out. The evil persona changes the Briheight into something more sinister and taunts the old man. Zetsuo is even more excited now and almost chokes as he laughs and says, “Now that’s more like it”! The evil persona, appearing unusually calm, states back “You and I are two of a kind”.

Thunder strikes in the background, illuminating a dark shadow over their Briheights, and the episode ends here. We will add more details after Back Arrow Episode 14 is released.