President Joe Biden held his first formal news conference since coming into the white house. He covered a wide range of topics and was pressed repeatedly about that surge of the southern border and whether his policies have contributed to the increase of unaccompanied minors.
65 days into his administration president walking out to face reporters for his first press conference and it was the emergency at the southern border now threatening to overshadow his agenda that dominated.

Reporter: “customs and border protection facility in donna texas. I was there is at 1556 percent capacity right now mostly unaccompanied minors there are kids that are sleeping on floors. they are packed into these pods what is your reaction to these images that have come out from that particular facility is what’s happening inside acceptable to you.”

Joe Biden:” Is that’s a serious question right, is it acceptable to me come on that’s why we’re going to moving a thousand of those kids out quickly that is totally unacceptable.”

Tonight there are some 16 thousand unaccompanied migrant childer now in U.S custody a near-record. 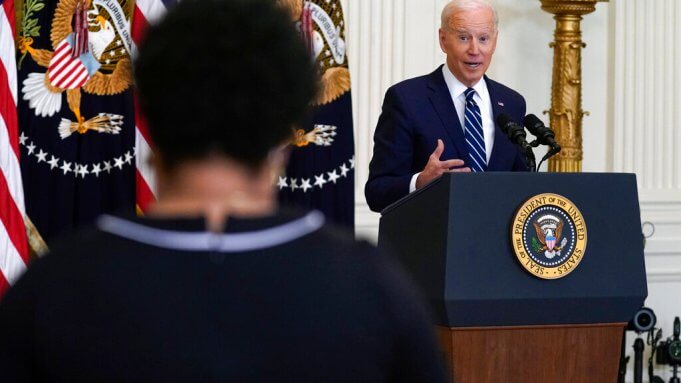 Reporter: “Sir, you blamed the last administration but is your messaging and saying that these children are and will be allowed to stay in this country and work their way through this process encouraging families like joe says to come.”

Joe Biden: The idea that I’m going to say which I would never do, if an unaccompanied child ends up at the border we’re just going to let them starve to death and stay on the other side. No previous administration did that either except trump. I’m not going to do it.

The other urgent crisis those two mass shootings in the span of a week 18 lives lost but facing the political reality that with the 50-50 split in the senate. His party does not have the votes to pass sweeping gun control legislation. The president issuing this warning to republicans signaling he could back changing rules in the Senate to push his agenda through.

Joe Biden:” we’re going to get a lot done and if we have to if there’s a complete lockdown in chaos as a consequence of the filibuster then we’ll have to go beyond what I’m talking about.”