At the starting of episode 6, we can see Isuzu in Shigure’s house and Tohru is talking to her. When Isuzu and Tohru went outside to the ground, Shigure, Hatsuharu and Yuki started talking about Isuzu. Yuki felt sorrow when he listened to that Isuzu was kept locked by Akito. Then Hatsuharu says that Isuzu doesn’t want to say that to Tohru. He also says that Isuzu is scared of anything related to Akito including him. Shigure asks him about the place where Isuzu was kept locked. Hatsuharu replies to The Cat’s Room. Shigure tells that the same cage that meant to hold Kyo soon.

Yuki remembers that Tohru’s mom’s death anniversary this week. So he tells Tohru that he will be going to come with her. Tohru is going with Arisa and Saki on Saturday morning, and he is most welcome. But Kyo says he cannot go with them.

Shigure uncovers the truth that the curse will gonna break

In the main estate, Shigure met Isuzu and says she doesn’t have to work hard to break the curse. The curse will eventually break itself and they are the last generation for the last banquet. At that time Tohru arrives and asks when the curse will break. This question startled both of them. She also worries about Kyo, so she wants the curse to break as soon as possible. Shigure tells that he is not sure about the breaking of the curse but he has his own theory to support that. He says to both of them that Kureno’s curse already broke and he is not one of them anymore. Shigure tells Tohru that whatever happens Kyo will gonna be kept locked and she cannot do anything about that. Tohru started sobbing, then Shigure asks her that if she loves Kyo. She cries and runs from the place.

On the street, Tohru is crying and remembering her mother’s memories. Kyo saw that and after coming in front of her he asks why is she crying. She tells she is lost and she doesn’t know what to do. So Kyo put his hand on her head and says not to do anything and when the time comes she will gonna do something. 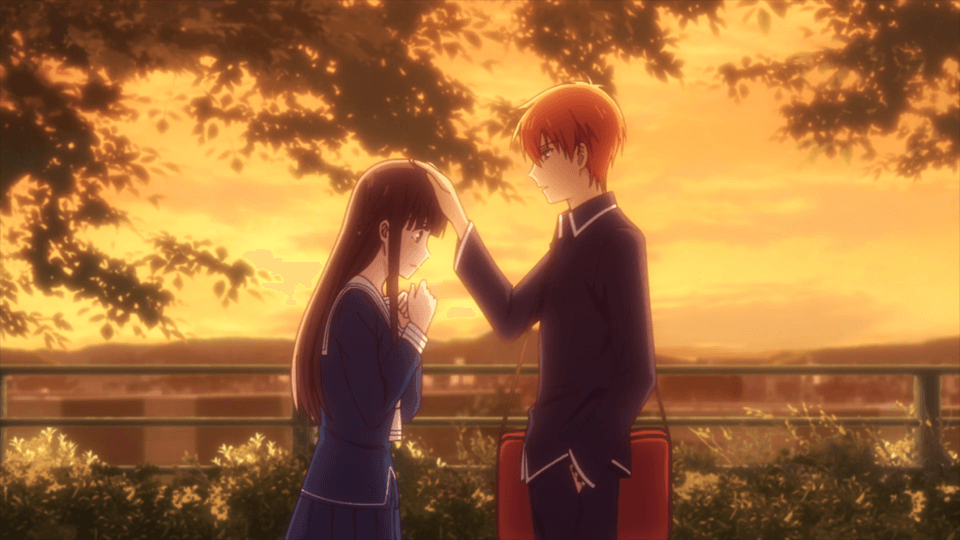 When Kyo went to pay respect to Tohru’s mother’s grave, he came across Tohru’s grandfather. Her grandfather asks about Tohru’s well-being with them. But most of the time he addressed Tohru as Kyoko, which was her mother’s name. So Kyo asks why he does that. He replies that he wants to keep Kyoko alive even she was dead. Because if he doesn’t do that Tohru will gonna fall apart.

Tohru went to Kyo’s master’s house in the estate to meet Isuzu. At that time Kagura was there and she is pretty angry seeing her because both of them loves Kyo. Master tells Tohru that she will find Isuzu in her room. Tohru went to her room. Tohru apologizes for the previous day. Isuzu asks her why she loves Kyo. Is that out of pity? Tohru replies she does not know her feelings. She just knows this there was a time when her mother was closest to her heart but now Kyo is on that spot. And she doesn’t want Kyo to be taken from her by any curse or Sohmas or anyone.

Both Kyo and Tohru came back to Shigure’s house in the evening. Kyo talks to her about her father. She tells that she is not like her father at least not how she looks. But she starts imitating her because when her father died her mother was full of sorrow. So Tohru started talking like her to make her mom happy. Kyo felt her loneliness and says it is fine what you did. It must have helped her.

In Tohru’s room, she gave the picture of her father to Kyo to see. but at that time he saw the cap on the table and he remembers something terrible and he seems scared. He remembers Tohru’s mom telling him ‘I would not forgive you’.

TMS Entertainment will release Fruits Basket Season 3 Episode 7 on May 18, 2021. The online platforms where you can watch Episode 6 are  Crunchyroll,  AnimeLab, and  Funimation.