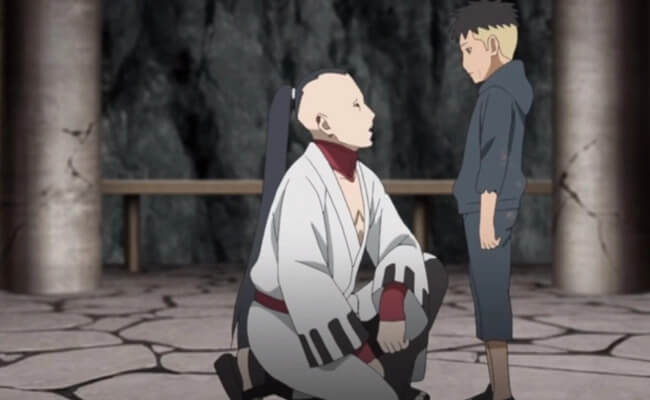 We have seen so far that Kawaki ran from the hospital, and everyone is trying to find him. We have already covered this whole thing in this post. We are moving forward when Kawaki was rushing madly through the nearby village. Lord Seventh stopped him using his Kurama powers, but he gets poorly injured in the whole incident. So everyone rushed towards the hospital, taking Kawaki to the hospital. While they were on their way, Kawaki started hallucinating about his early childhood days. We got to see a glimpse of his childhood. He belongs from a small village and only has his drunken father as his guardian. He used to sell firewoods in the morning for his living and brought beer bottles in that money for his father. Late, he started dreaming about the incident where a goldfish seller arrived in the village town and asked him to buy the goldfish, but he didn’t buy it as he didn’t have the money. The next day the two boys bullied him cause of his drunken father and punched him in the face when he denied him. Thankfully the goldfish seller saved him and advised him that he had walked the same path several years ago and didn’t achieve a single thing. Later in the episode, Jigen brought him from his father by giving him a hefty amount. Kawaki Feeling a bit scared, but Jigen told him that This is a safe place no need to worry. He brought him for some ritual.

And boom! He woke up, adjust his pillow, trying to sit, and saw Naruto sitting next to him. “This is a safe place no need to need to worry,” said Naruto in a calm tone.

In the next episode, we will see a glimpse of Jigen’s ritual and Naruto and Kawaki’s conversation.

Also read: Young Justice Season 4: Everything You Need to Know