Tokyo Revengers Episode 8: It is an adaptation of manga series of the same name written by Yasuyuki Mutō and directed by Koichi Hatsumi. The shonen manga is well known for its intricate storyline and relevant characters. As of now, the manga sold well over 14.5 million copies. The first episode of the Tokyo Revengers anime adaptation was premiered this year on April 11. Until now we got 7 outstanding episodes. And fans are eagerly waiting for the next one to come.

The episode starts with Osanai coming at Toman Gang. And he is here because he heard that Toman is going to take the fight with Moebius. Osanai was not alone though he came there with his gang. About 30 to 40 high schooler rebels. Osanai says to Mikey that you don’t have to go to fight. Because we have brought the fight to you. Most of the Moebius gang members have baseball bats in their hands and they are teasing Toman as punny middle schoolers. Osanai says that this is a war.

Mikey stands up and comes in front of Osanai. And Takemichi is pretty worried about that. He is in fear that the conflict between Toman and Moebius is about to start. 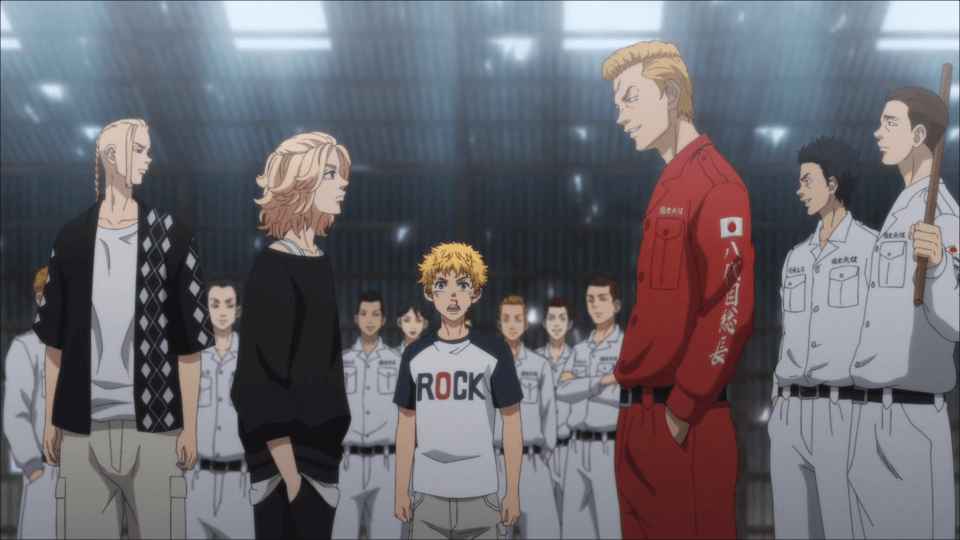 Mikey teasing Osanai by saying that he brought these many guys to fight some middle school boys. Takemichi is thinking about Osanai. He is like a completely different person in the future. When he was thinking about Osanai he was looking down on Osanai. And that pissed Osanai off. As a result, Osanai starts to beat Takemichi. Haruki or Pah-chin stopped Osanai. Takemichi is pretty beaten up but he still asks Pah-chin not to fight with Moebius. Pah pushes Takemichi and tells him to stay out. Ryohei says Takemichi that Pah-chin is one of the best fighters of Toman. And he will never gonna lose to Osanai.

But Takemichi says to himself that how powerful Toman is is not the problem; the main problem is if he doesn’t stop them, Draken, Akkun, and Hina will die. And he must have to stop them. At that time Mikey says to Takemichi to stay back and watch Pah fight.

Osanai throughs some punches onto Pah’s face. Pah’s face starts bleeding. Seeing this Ryohei gets worried. So he tries to run to Pah. But Mikey stops him and says him to stay back. Takemichi says to Mikey that it is cruel to stay back and watch. Pah-chin is bleeding and is barely conscious. In this way, Pah-chin gonna die. Osanai continues to beat Pah. At last, Pah gives up. Mikey holds him. Pah says to Mikey that he is worthless. Mikey replies that what are you talking about. You have not lost.

Mikey leaves Pah in-ground and goes in front of Osanai. Everyone is laughing at the Toman gang. Osanai laughs and says Mikey that he will take Mikey down in ten seconds. Takemichi is in fear that Mikey cannot take down Osanai. But Mikey throws some kicks and brings Osanai down in seconds. Seeing this, everyone in Moebius is terrified. Takemichi is also stunned. Mikey says to all other Moebius members that whoever will try to go to Pah, will murder them. Mikey says to all that Toman will never lose as long as he is with them. 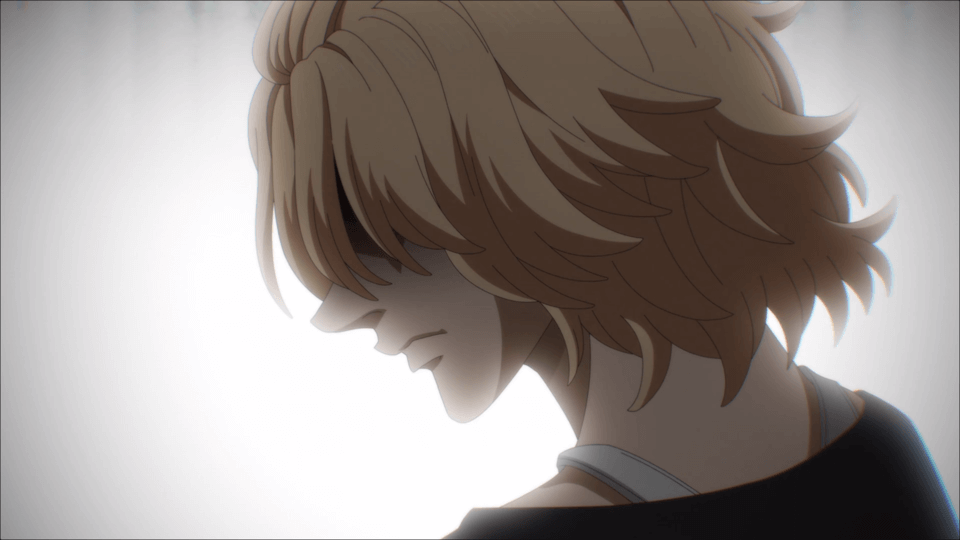 Osanai was down on the ground. He gets his sense back. And then he took a broken glass bottle, laying in front of him, and goes to kill Mikey. But Draken sees it and covers Mikey. Takemichi shouts at Osanai. Then we can see that Draken has taken down Osanai with a kick to Osanai’s stomach. Draken tells Osanai why he lost. He says that Osanai has lost his path. Assaulting someone’s parents is bad for even a rebel. And Draken also warns all the Moebius members that if they do anything messed up then Toman will come to beat up them. He also says that Moebius will now be under Tokyo Manji Gang. Takemichi realizes that this is how Toman got bigger. Then the police arrive and everyone starts running from the warehouse.

Draken was holding Osanai in his hands. Pah, who was wounded on the floor. opens his knife and stabbed Osanai on the back. Mikey, Draken, and Takemichi were terrified. Because they never guessed that Pah can do such a thing. Pah-chin was standing and says to Mikey that he will gonna turn himself into the police. Mikey shouted but Drakken holds both Mikey and Ryohei and starts running. Mikey keeps shouting. Then the police arrive and catch some of the Moebius gang members and also Pah-chin.

All of the Toman members were running through a street. While running Takemichi starts to feel that he is losing his consciousness. Then he falls down on the street. Mikey looks behind and finds Takemichi on the ground.

Tokyo Revengers Episode 7: Takemichi ended up in the hospital

When Takemichi wakes up he finds himself on a bed in the hospital. He yawns and stretches his arms, one of his arms touches something soft. When he realizes that it is Mikey’s half-sister Emma’s bre*st, he went backward. And starts apologizing. Emma calls him a pervert.

Then Takemichi remembered that he fainted on the street. He asks for Mikey and other members. Emma says Draken called her and when she got there she only found him. Takemichi asks for Draken. Emma starts crying. Emma tells him that Draken got in a fight with Mikey. Takemichi asks why they did that. Emma tells him that she doesn’t know how it started but now the Toman has divided into two groups Mikey faction and the Draken faction. She also tells that the reason might be something about Pah-chin getting caught. Then Emma starts crying on his lap. And at that time Hinata comes and gets the wrong idea.

On August 1st Takemichi is thinking in his room about the division of the Toman gang. He remembers the words of future Osanai. And worries that at this rate internal conflicts will begin in Toman. And on 3rd August Draken gonna die. At that time his friends arrive at his house. Takemichi asks them about Mikey and Draken. They say they don’t know where they are. Akkun says that the things between Mikey and Draken are bad. Their relationship is irreparable now. They also say that in this way Toman gonna split up. Then from nowhere all of his friends starts laughing. Akkun says Takemichi that they were just messing with him. Because they believe that Draken and Mikey will be friends again.

Draken arrives at Takemichi’s house and surprises all of them. He says that he came to see Takemichi. Draken brought a watermelon and asks them to eats. After eating, Draken says Pah gonna be in jail for at least a year. Takemichi asks about Osanai. Draken says he is alive. Takemichi asks for Mikey to him. As soon as he did that Draken slams his fist on the 2500 pieces puzzle, which Takemichi solved over 3 days. Takemichi starts screaming and says his last 72 hours just went down the drain. Draken says sorry and also added then he is done with Mikey. When Draken was coming out he saw Mikey in front of Takemichi’s house. All of Takemichi’s friends and Takemichi are terrified. Both Mikey and Draken start quarreling over Takemichi. 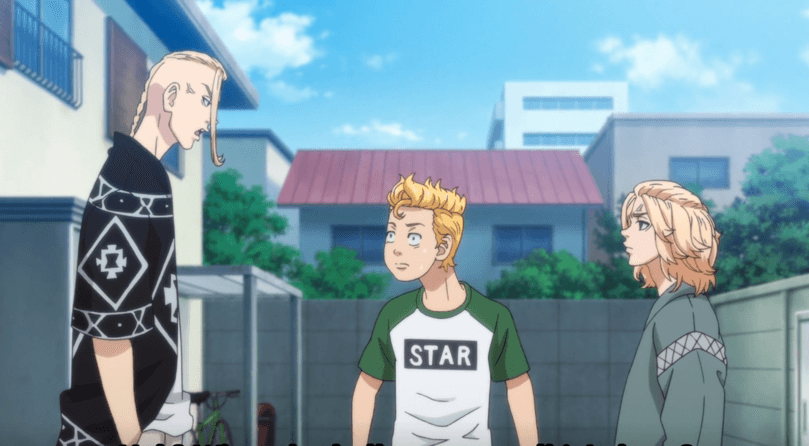 Takemichi tells both of them to stop. He doesn’t know what happened but fighting will not gonna solve anything. Mikey throughs Takemichi’s bicycle to Draken. Draken dodges that and the bicycle breaks. Takemichi screams for his bicycle. Draken takes Takemichi’s baseball bat. Takemichi again screams and tells that that is the bat he used to hit his first home run in 4th grade. In this way, they start throwing Takemichi’s valuable things at each other. Mikey says to Draken that they gonna settle things there. But Takemichi is very angry and fire coming out of his back.